Almost 90 million kangaroos and wallabies have been killed for their meat and skins over the last 30 years. It is the largest commercial slaughter of land-based wildlife in the world.

Australia’s iconic kangaroos are hunted in the largest commercial slaughter of land-based wildlife on the planet.1 Almost 90 million kangaroos and wallabies have been lawfully killed for commercial purposes in the last 20 years.2

Kangaroos are native animals who have adapted uniquely to the Australian landscape. Their ancient ancestor has been traced back 24 million years to the Palaeopotorous – the starting point of all known kangaroo species.

What is the Commercial Kangaroo Industry?

However, some scientists argue that there are issues with the methodologies used to determine these population estimates, placing into question the sustainability of the quotas.

Voiceless, animal protection advocates, and scientists, have also raised concerns regarding animal welfare issues in the industry (see discussion below).

What is Non-Commercial Kangaroo Hunting?

RSPCA Australia state that ‘[t]he general opinion given by those associated with kangaroo management is that there is a far higher degree of inhumane killing of kangaroos in non-commercial killing than with commercial killing’.

In some circumstances, there are non-lethal kangaroo management alternatives available, including translocation and fertility control.

Why Does Australia Allow Kangaroo Hunting?

Australian governments support non-commercial kangaroo hunting due to a belief that kangaroos are overpopulated in certain areas. They view kangaroos as pests that need to be controlled in order to maintain ecological balance and reduce impacts on agricultural land.

Voiceless and other animal protection advocates challenge these ways of conceptualising kangaroos, questioning their classifications as ‘resources’ and ‘pests’. Despite being a native animal, many farmers consider kangaroos to be ‘economic’ pests because kangaroos break fences and are perceived to compete with their cattle and sheep for resources.

According to THINKK (the think tank for kangaroos), multiple studies show that kangaroos do not compete with livestock for food resources (except during drought) and kangaroo populations are not dependent on artificial watering points. Moreover, kangaroos have a small fraction of the energetic requirements (the need for food and water) of livestock.

A 2004 report by the Cooperative Research Centre for Pest Animal Control found that the estimated annual cost incurred by farmers due to kangaroos should be revised down from $200 million to $44 million, or $1.67 per kangaroo per year.

Animal protection advocates also raise broader issues with the use of the term ‘pest’ to describe any sentient animals, as it suggests that the lives of these animals are inherently less valuable than others.

How Are Kangaroos Killed?

Kangaroos are not farmed for their meat and skins. They are shot in the wild at night when they are most active, in generally rural and remote areas of Australia.

While shooters are required to abide by Commercial and Non-Commercial Codes of Practice which require them to aim for the brain to achieve instantaneous loss of consciousness, many factors affect their ability to achieve this.

Factors include impaired vision due to darkness and distance, weather conditions, the small target size of a kangaroo’s head, unexpected movements of startled kangaroos, and the skill and experience of the individual shooter.2 Accordingly, non-fatal body shots are an inevitable and unavoidable part of the industry, with the potential to cause painful injuries, prolonged suffering and a slow death.

Due to limited monitoring, it is difficult to establish accurate figures for the numbers of kangaroos who are mis-shot and wounded each year.

One method for trying to ascertain the number of mis-shot kangaroos is to examine carcasses in meat processing plants and chillers. Data collected from meat processing plants by RSPCA Australia in 2002 suggested that 4% of kangaroos were mis-shot, whilst an Animal Liberation NSW study examining chillers suggested that 40% of kangaroos may have been mis-shot.3 The Animal Liberation study examined whether the head was removed at the occipital joint, which may indicate that the kangaroo was shot in the neck rather than the head.

However, the precise number of mis-shot kangaroos can not be ascertained using these methods as commercial shooters are not paid for body-shot kangaroos, and therefore do not bring them to processing facilities.

Accordingly, although we know that wounding definitely occurs, we do not know exactly how many kangaroos are wounded as a result of the commercial kangaroo industry each year.

How is Compliance With the Code Monitored and Enforced?

State governments are primarily charged with ensuring that compliance with the Code is monitored and enforced. However, monitoring is particularly difficult in this context due to the fact that kangaroo shooting occurs at night across varying rural locations.

Although some inspections in the field do occur, there are no consistent regular inspections of all shooting locations. Boom et al argue that ‘[t]he lack of consistent and uniform inspections presents the most significant gap in the regulatory activity within the kangaroo industry’.4

Without inspections at the point of kill, it is very difficult to ensure that shooters are in full compliance with the Code.

A further issue is the fact that shooters are not required to retain the heads of kangaroos they have shot, making it challenging for authorities auditing these facilities to confirm whether they were killed by a direct shot to the head (as mandated by the Code) or a neck shot.

Why Are Joeys and Young-At-Foot Killed?

According to the Code of Practice for non-commercial shooting, shooters should avoid shooting female kangaroos where it is obvious they have dependent young. However, this guidance in the Code is not mandatory, and shooters are not expressly prohibited from shooting kangaroos with pouch young/young-at-foot. This guidance is not provided in the Code of Practice for commercial shooting.

As joeys can’t survive without their mothers, shooters must euthanase the joeys of killed females. Joeys left in their mother’s pouches, or alone in the bush, are likely to die from exposure, starvation or predation. Due to a lack of comprehensive in-field oversight, it is not possible to definitively state how many joeys are killed each year as a result of the commercial kangaroo industry. However, on a 10 year average, it is estimated that 800,000 dependent joeys are killed as collateral damage of the industry annually.5

It is also not possible to determine exactly how all joeys are killed in the field by shooters, and whether the methods of euthanasia used in practice are in compliance with the Code requirements.

Welfare issues are also created when shooters fail to euthanise joeys, who are unable to survive on their own in the wild. In 2014, the Rural Industries Research and Development Corporation published a report which found that although kangaroo shooters ‘report a strong intention to euthanase young-at-foot…this happens only rarely…’

Will There be a Ban on Killing Female Kangaroos? 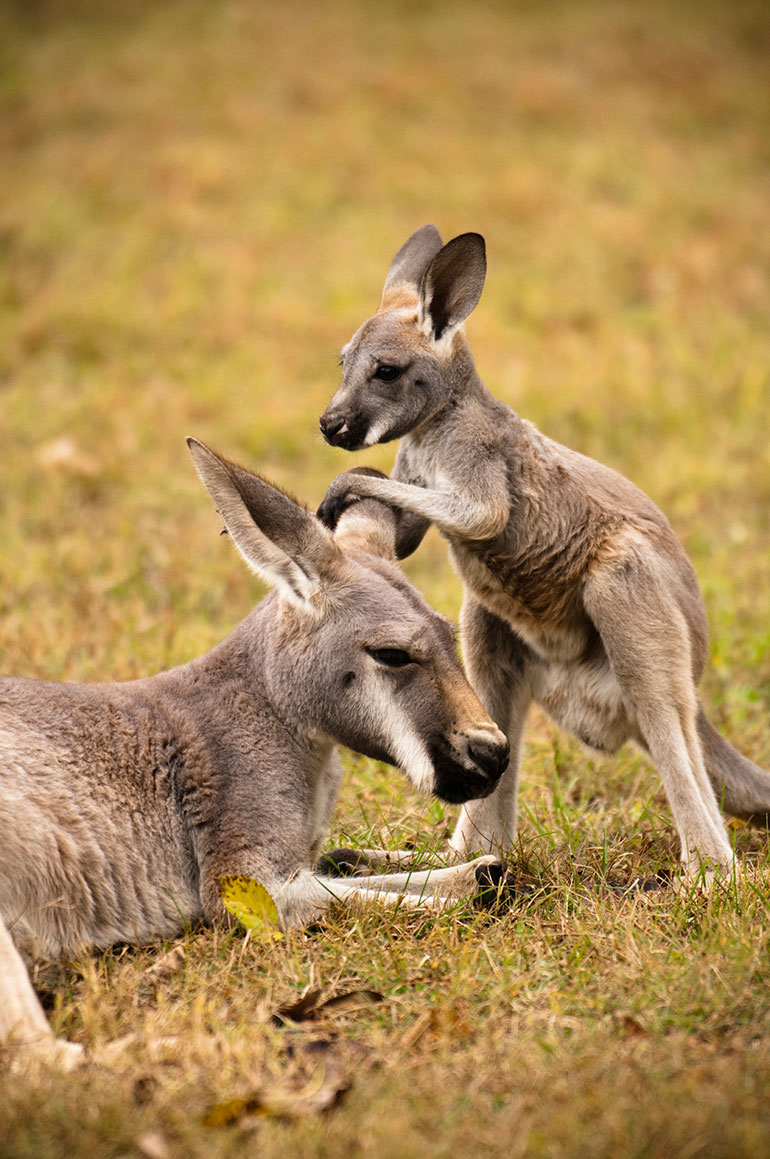 Limited monitoring of compliance with the Code leaves open the possibility that dependent young will either be euthanised inhumanely, or not euthanised at all (leaving them vulnerable to death via predation or starvation). RSPCA Australia are of the view that a complete prohibition on shooting female kangaroos may be ‘the only solution to totally avoid the potential of cruelty to pouch young’.

The industry itself has begun to move away from female kangaroo shooting. In 2013, the Kangaroo Industries Association of Australia introduced a policy encouraging industry transition to a male-only take. Since that time, they report that ‘the level of females taken have declined from 30% of the overall take to less than 5% (NSW 2014, Qld 2015)’.

The Code of Practice for commercial shooting was reviewed in 2020. The revised Code failed to implement a prohibition on female kangaroo shooting, instead detailing more specific methods for killing dependent young. For example, in relation to euthanasia of partially-furred to fully-furred pouch young, the revised Code states (inter alia):

To deliver the concussive blow, carefully remove the young from the pouch (note they are not permanently attached to the teat at this stage of development but could still be suckling), hold the young firmly by the hindquarters (around the top of the back legs and base of tail) and then swing firmly and quickly in an arc so that the rear of the joey’s head is hit against a large solid surface that will not move or compress during the impact (e.g. the tray of a utility vehicle).

DO NOT hit the joeys’ head against the railing of the utility rack, as this can result in decapitation rather than the intended concussive blow to the head.

DO NOT suspend joeys upside down by the hindquarters or tail and then try to hit the head with an iron bar (or similar). Holding them in this manner allows the joey to move around and makes it difficult to make contact with the correct location on the head. In addition, the force of the blow may not be sufficient to render the joey unconscious with only one strike.

Accordingly, it is unlikely that a prohibition on female kangaroo shooting will be achieved in the near future, given the revision of the commercial Code took 12 years since the first edition.

What is Voiceless Doing to Help Kangaroos?

Voiceless is at the forefront of kangaroo advocacy in Australia and around the world, calling for an end to the commercial kangaroo industry.

Through the Voiceless Grants program (2004-2017), Voiceless supported numerous projects raising awareness of kangaroo welfare and the commercial kangaroo industry, including:

Voiceless has also supported the development of scientific and legal research on the issue. Directors Dr Dror Ben-Ami and Dr Dan Ramp co-founded THINKK – the Think Tank for Kangaroos. As a science-based research centre at the University of Technology, THINKK fostered understanding amongst Australians about kangaroos through critically reviewing the scientific evidence underpinning kangaroo management practices and exploring non-lethal management options consistent with ecology, animal welfare, human health and ethics. Voiceless similarly supported the founding of the Centre for Compassionate Conservation (CfCC) in Australia.

Voiceless is now raising awareness of these issues outside Australia, working closely with numerous prominent EU non-government organisations through membership with Eurogroup for Animals. We also regularly deliver presentations at universities across Australia, highlighting the inadequacies of the laws and policies governing kangaroo welfare.